Life in Washington was so full of visits to see my family, that we forgot to let everyone know about our next contract! We were hoping to head towards Southern Utah and Northern Arizona to knock a few things off our bucket list. A good med-surge position opened up in a small town called Tuba City in Northeast Arizona. The location was within a four hour drive of all the things on our bucket list, so we snagged it.

Our contract in Montesano ended on Thursday, February 21st, and we were ready to hit the road. Unfortunately, there was some bad weather between us and California, so we decided to wait for it to clear. By the time Sunday came around though, the weather still wasn’t looking great. We were running out of time, so we figured we would at least drive until we couldn’t and then wait there until the roads cleared. We didn’t even make it to Cottage Grove, Oregon before the snow started dumping on us. We found a rest stop and pulled in to the last two spots, right behind all the semi-trucks, and crashed for the night in the little camper. By morning there was over a foot of new snow! We were stuck. Not only was the snow still falling, but so were the trees. One car had already had it’s back end smashed in by a tree, thankfully no one was injured. Big branches were cracking and falling, everywhere you turned. I had to run out from under one when I took Cooper for a walk. The rest stop lost power, which meant they lost water, so they closed the bathrooms. With the road conditions the way they were and people looking for a safe place to stop, this meant that dogs weren’t the only ones relieving themselves behind the building. We were thankful to have our little camper, running off a generator, offering us heat and a bathroom of our own. Turns out we had pulled off of I-5 just in time. The interstate closed and cars were stuck in a 115 mile back up for 10 hours while the road crews cleared downed trees and power lines. We spent twenty hours in the rest stop until we saw movement on I-5. There were still road closures to the South, so we decided to head back North a little in order to get away from the deep snow and falling trees. It took us 2 hours, but we made it back to Eugene, where we parked in a vacant mall parking lot for the night and found some dinner. At 9 o’clock a very dedicated mall security guard pounded on our door and told us we could not stay. We reluctantly woke the kids and relocated to a Costco parking lot down the road. The next day we headed South and made it to Medford before we got dumped on again. We decided to splurge a little and get a hotel for the night. We showered up, the kids enjoyed the pool, and we were happy to wake up to rain. We made it into California and passed Shasta Mountain before my phone started ringing. It was Asia. She was with Erich, behind me, in the truck pulling the bigger rig. They had lost a wheel on the camper and were on the side of the road! The entire wheel and rim had flown off into the field along the freeway. A passerby told Erich it flew off so fast and so far he didn’t think we’d ever find it. We didn’t. The lugs on the drum had literally sheered off. Without the wheel, the rear right side of the camper had hit the ground and dragged, sustaining some damage to the bumper and some of the under-skirting. All things considered, we were feeling pretty thankful that more damage hadn’t occurred and that our family was safe. Erich was able to remove the drum and we headed out to find a NAPA. They had never seen anything like it and agreed with our hunch that it had to do with the previous issue of the axle being underrated for the weight of our rig. Long story short, they helped us find the right size lugs and lug nuts and Erich was able to get us on the road again. Even with flares, repairing our wheel on the side of I-5 was more than a tad stressful and I was thankful for Erich’s automotive skills.

We finally made it to Redding, California where we parked our big camper at Bethel and our little one at the house of some good friends. Our whole family enjoyed reconnecting with Johnathan and Tina and their sweet kids. They also blessed us with food, showers and clean laundry! Time was short and we hit the road again the next afternoon, eventually setting up camp at a rest stop just South of Fresno. When Erich inspected the wheels the next morning before we left, he found the same wheel was about to come loose again. The rim was damaged as well as the drum itself. If we had started driving, it wouldn’t have lasted even an hour. There were mixed feelings of thankfulness AND frustration, but Father’s faithfulness greeted us again when we found a tire shop that knew what was wrong and where to send us. The trailer part supply store they sent us to hooked us up with a matching rim and the exact drum that we thought we’d never find! Even our axle manufacturer thought we’d never find one and would need to special order it. The guy at the shop handed Erich the whole unit, assembled, greased and ready for Erich to slide on. Erich had no way of knowing the drum was damaged, but his first fix got us to right where we needed to be to get everything we didn’t know we needed. How cool is that?! Through it all, our kids were rock stars, never complaining, whether we were stuck on the side of the road or in a rest stop (or two), they handled it like champs. It was midday before we were able to start driving again. We were going to call it quits around nine that night, but apparently Interstate 40 is a major trucking route and every rest stop was either full of trucks or closed. We drove and drove until midnight when we finally found a truck stop where we slept and slept. We pulled into Tuba City on Saturday afternoon and set up camp in the middle of a downpour/mud puddle. What a trip! Longest 22 hour drive ever.

In tough situations, I think we can sometimes be quick to ask “Why?” Depending on what church you grew up in, you might read this story and think; “God must not want them to go to Arizona,” or “The enemy must not want them to go to Arizona,” or even “What did they do to step out of God’s favor?” But what if all of our programming is wrong? What if hardships sometimes just happen, and our job is to grow from them? To use them as an opportunity to demonstrate trust, grace and faithfulness to our kids, regardless, and in spite of, the hard thing? Through it all, I hope our kids were able to look at us and find peace in knowing what we know, that we have a good, good Father.

I’ll tell you more about Tuba City in my next post, this one already feels almost as long as our drive did! P.S. The kids helped me with this weeks title. 😏

Life lessons this week: never buy a camper from Forest River, mall security guards are for real, and rest stops don’t always live up to their name.

Cooper was definitely not minding the snow. 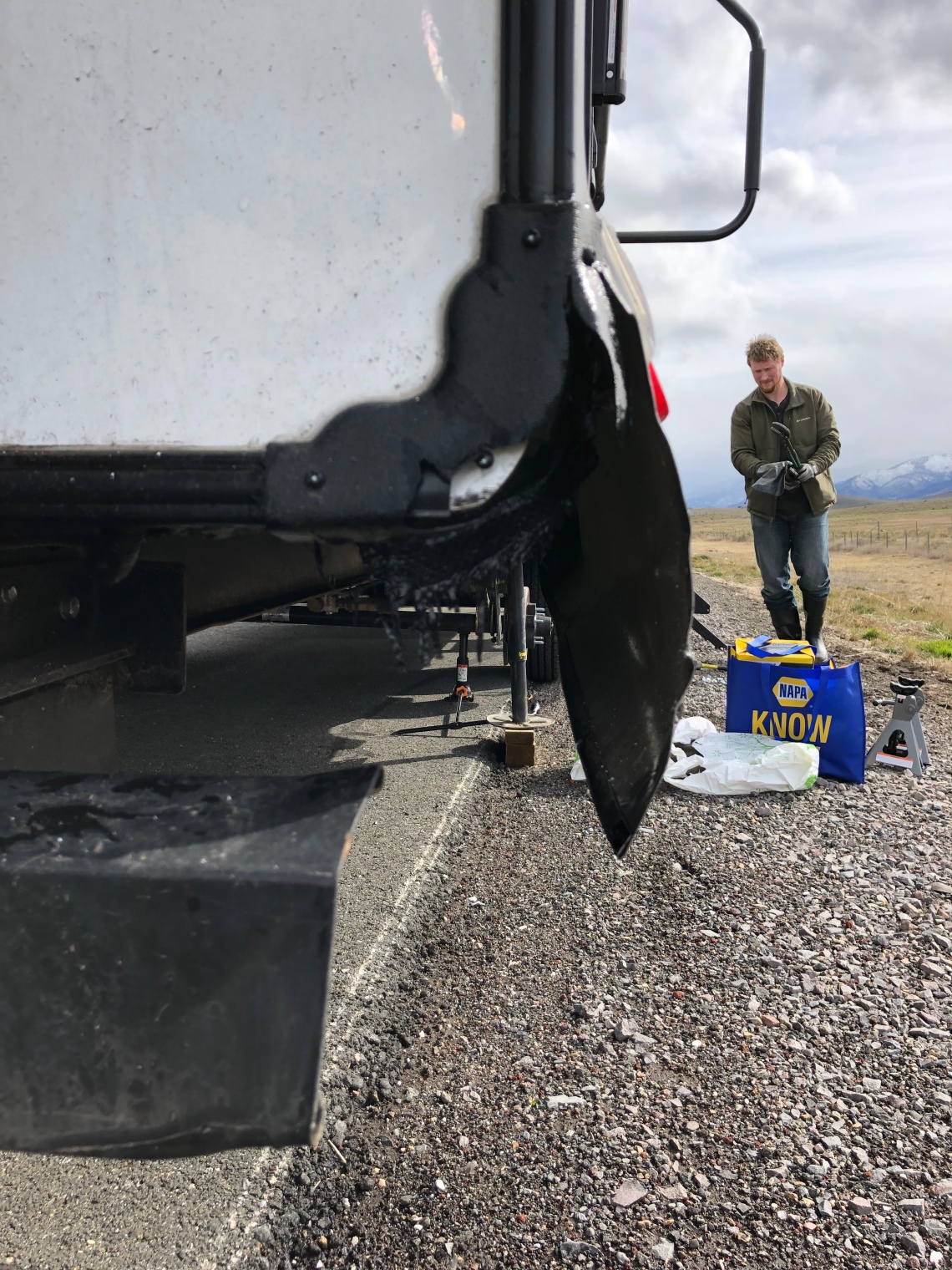